My apologies for the delay in posting this blog ….. I started writing it soon after we arrived in Zelzate (beginning June) to go to Carron Marine for essential repairs. It is bad enough when you have planned to have works done, but when it is forced upon you and then one thing after another gets added to the list it’s somewhat annoying to say the least! So this is what I started writing ………

Well here we are in Zelzate ……. up in the air ……. and on the wonk …….. strong list to starboard …….. really strange to be continually on an uneven keel! Particularly unnerving when one has to get up in the middle of the night & stumble down the incline to the loo! I really felt quite odd after our first such night (3rd June) on board, so much so that we went to enquire at the local B&B which is literally just across the road from the marina / boatyard.

So what’s been the problem(s) I hear you ask……

Well there was the knackered transmission arm which needed removal – had to cut the rudder off in order to get it out- a new one of them was required!

Then the gearbox needed some attention – major job getting that off and then back on the boat! They had to lift it with the crane.

And the fuel problem, which we thought we’d dealt with a couple of weeks ago, resurfaced as we came down the big Ghent-Turneuzen Kanaal. Engine repeatedly lost revs and actually cut out a couple of times – not good amongst the H U G E sea going ships! We had treated the fuel and changed the fuel filter some weeks ago but we didn’t know we have 2 fuel filters! As soon as Adrian removed that little deevil we could see it was chocker block with crud! We had to order some new bits for it as the guy who took it away to clean it promptly lost the important central filter! But we know we have two filters now, where they both are and that they need TLC …… Onto servicing list!

And whilst we were out of the water we thought we’d have the hull pressure washed so that any ‘scratches’ we might have received over the last 4 years could be titivated! It didn’t look too bad but when washed – the paint on the hull flaked off in lots of places!!!! Ever wished you’d kept your mouth shut????

This was the expensive job we had done when we first bought the boat because it had not been properly sorted out underneath when built. At Evans in Migennes it was industrial high speed pressure washed to get right back to steel and then given 3 coats of ‘good stuff’. We were certainly not expecting it to literally come away in our hands, sir! And, guess what? Simon at Migennes has ‘never had a problem like that before’ ‘ you must have knocked or scraped it’! Yeah right!!!

This led to all the underside paint having to be ground off by hand and then the steel was scoured to give proper purchase for the new paint – 2 coats undercoat and 2 top coat!    All by hand! Took days & days and was very noisy and very very dirty! And the temperature went up and up!

Carron’s boatyard was very reminiscent of Evans at Migennes – including a workers’ toilet we could use but it was basic. And a bit of an obstacle course to negotiate to get to it. On board was not a nice place to be. That B&B came in very handy. 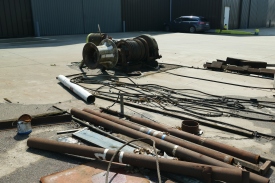 We took advantage of our elevated position to re paint the blue hull once they had stopped making such a mess. When we painted the cream in Migennes it was very hot …. and so it was this time so we started as early as we could. At first I was very cautious about walking around on the platform but its amazing what you get used to when needs must. Adrian rigged up a harness system so that he could reach the bow.

It seemed like we would be there, up in the air, forever but suddenly the guys were everywhere – replacing the transmission arm and gear box; welding the rudder back on etc etc. The pontoon contraption we were on was needed for a commercial boat, so after 3.5 weeks they wanted rid of us asap! We eventually left the yard on 27th June and moved back into the marina so that final adjustments and checks could be carried out when we were horizontal once again!

It took us 3 days to get the inside back to some sort of normality! A drawback of having the engine under the salon floor is the mess that you have to live with whilst major works are underway. So glad we have our ‘home’ back again. 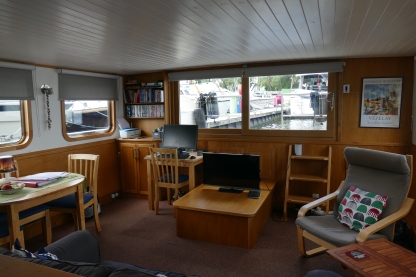 The trip up the Ghent-Turnuezen Kanaal was so much less fraught than the trip down when we did not dare to rev the engine too much (because of the transmission problem) and the engine kept losing revs (because of the fuel problem) just as a ferry was cutting across towards us at speed….

We just cruised on up to Evergem lock, went straight in and carried on to Deinze where we promptly met Keith again and went for a most welcome beer at BrunO’s. 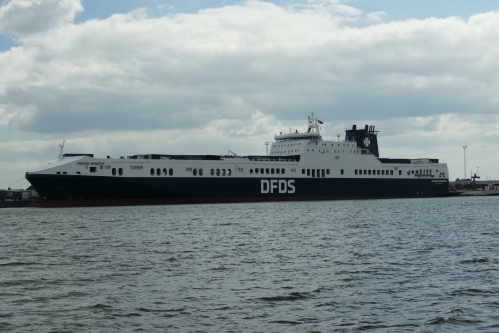 Relieved to leave these H U G E bad boys behind!!!

One thought on “On an uneven keel……”