Along the length of the Somme we have seen some beautiful properties and quite a few chateaux. Some are well mentioned in our guide books, others not mentioned at all. On our way down the Somme we have visited 4 in differing states of repair. Most chateaux are privately owned and therefore photos of the interior are not allowed.

An immaculately restored chateau although all the furniture etc is ‘of the period’, not original, as it was all sold or removed during a 25 year period when it was abandoned and vandalised. During the war it was used by the Germans. Apparently the wooden panelling wasn’t defaced but they used one salon as their motor pool (because it was warmer) and it took a lot of careful work to remove the oil stains from the floor!

The last 2 owners have obviously spent a fortune on recreating the grandeur of the interior although much is ‘trompe l’oeil’ eg incredibly realistic marble effect painting. Each room is lined with wooden panelling with paintings above the doorways showing differing scenes. In the zodiac salon the original 12 paintings were apparently retrieved after having been sold to an american, boxed up and held up at the port for several years awaiting transportation. For once french bureaucracy had its uses!

Another stroke of luck saved the exquisite panels in one room – a local man had put some form of water-based wash over them to protect them. As they were about to be ‘redone’ one of the workmen remembered his grandfather talking about doing this and so they were restored simply by delicate washing work. It was obviously an extremely lavish chateau and the gold leaf detailing has been renewed throughout.

We were shown the ground floor, the upper floors are still used by the current owners as their country house!

The grounds are beautiful, immaculate, sweeping down to a lake and bordered by the canal which was adjusted to provide the owner of the chateau with a view of the passing boats. 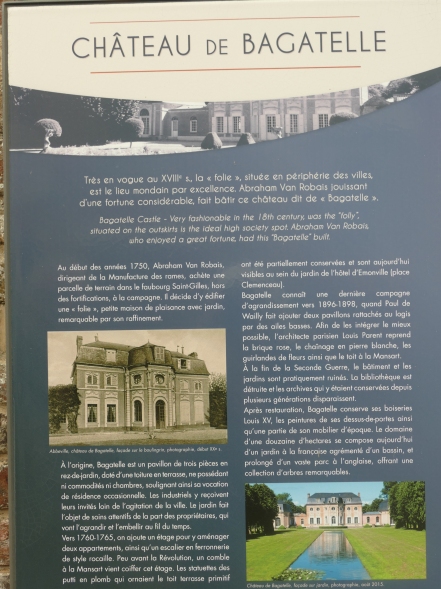 We had a private viewing with, so we discovered, the current owner who lives there with his 2 dogs. It seems that this was his childhood home but it was sold at some point, and he bought it a year ago to bring it back into the family. He said he also lives in Paris but now mainly in the chateau because one of his dogs won’t eat if he’s not there!

The chateau was originally a single storey, 4 roomed country house for a local wealthy businessman. His trade was ‘draps’ (sheets) and the stone facades around the windows are ‘curtained’ to reflect the origin of his wealth. The extra 2 floors were added over the following 20 years or so and then the 2 side wings about a hundred years later.

Internally it is delightful – real faded grandeur – the wooden panels are original, cracked and in need of tlc but all the more endearing for that. As at Folie de Buissy there are paintings above the doors and on the ceilings and he explained the stories behind each. One ceiling was decorated with an eagle in recognition of a Baron de Kalb the french general who fought and died with the americans during the revolutionary war.

It is obviously his home. There are 2 salons – one for summer and one for winter, the latter he described as the ‘dogs’ salon’ –  where he plays with them on the floor each evening! Upstairs we saw the lady’s bedroom suite; it had been his mother’s and there were photos of his father and of him aged 7 with his 2 brothers on the dressing table.

The ‘parc’ (grounds) are extensive but far from manicured. He said they were previously kept pristine by the use of pesticides which he has stopped. So there are weeds and the paths are sprouting but it all adds to the general feel of the place. Many of the trees are very old – a chestnut tree over 200 years old – so are all protected and he has to get permission to cut or prune them. 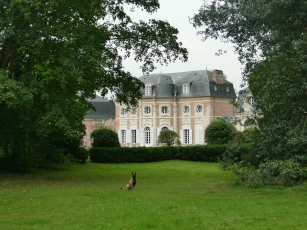 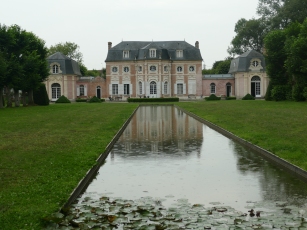 We took a day out from Abbeyville to visit Mers-les-Bains and stopped off at Chateau-fort de Rambures. Another delightful visit!

Chateau Rambures was constructed in the middle ages in the style of a military fortress of the 15th century and was one of the first castles in Europe to be constructed almost exclusively in bricks. This fortified chateau was certainly built to repel all boarders! The walls are between 2.5m and 8m thick & were designed so that the stone canonballs would glance off the rounded walls. It was further protected by a moat and drawbridge.

The castle contains very interesting Picardy furniture from the 15th, 16th and 17th centuries. We were told that all chateaux were supposed to provide a designated room for when the king might drop by!  We were shown a room with furniture of the period just off the extensive cellars. When a previous owner was renovating the chateau she decided that this ‘spare’ room would be presented as the king’s room although he would never have stayed in it.

Privately owned, the family now live in the large house beside the chateau, so that the chateau can be open to the public. The surrounding parc is beautiful with magnificent trees, a little chapel… 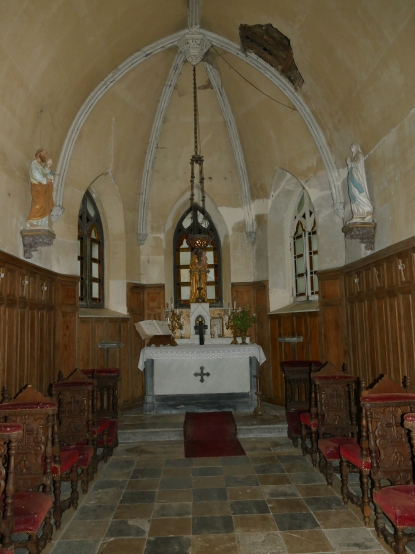 and a most amazing rose garden with over 500 varieties of roses! Beautiful to see and to smell! 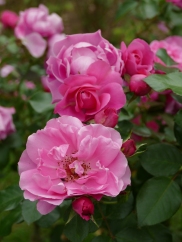 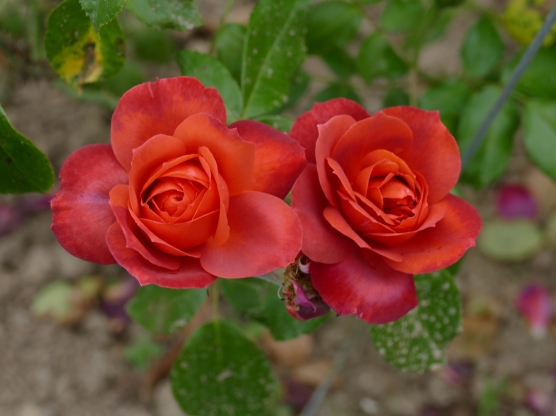 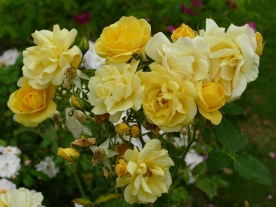 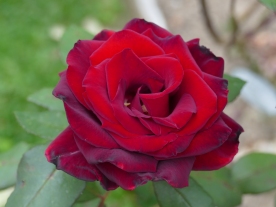 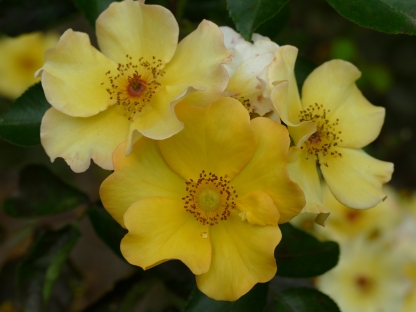 As we were driving back from Chateau de Bagatelle we spotted a sign for another chateau in the village of Eaucourt – so we did a U-turn and came upon the Chateau feodal, which is in the process of being excavated by the Jules Verne Dept of Archaelogy of Amiens university, prior to being reconstructed – the whole process is expected to take about 30 years.

We didn’t get a private guided tour this time but it is obviously attracting a great deal of interest – lots of people, families, throughout the site. In the nearby riverside bar – Peniche Jessy – we learnt that bus loads of schoolkids are brought here to see the excavations in progress.

One thought on “Chateaux of the Somme”