Onwards on Monday 19th August from Corbie to Amiens…..

An absolutely lovely stretch of river – we saw several rural places where we would like to moor overnight when we come back this way!

The approach to Amiens is particularly interesting as you pass a series of little gates and bridges on either side of the river which lead to a wetland area formed by a network of channels and lakes. It is called les Hortillonages and the islands formed over the years due to the extraction of peat are owned both privately & by market gardeners. 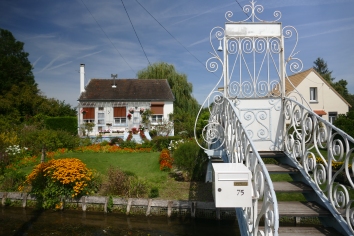 We arrived in Amiens and were able to moor behind Contessa right in the middle of this delightful town! We were invited for drinks with them. Mandy and Bill were at the other mooring (just above the lock) with Aileen and Graham (another NZ couple) and so the drinks group expanded from 4 to 8! Kiwis all except us! We then all went out to dinner in one of the riverside restaurants in the old St Leu district – just along from our mooring. Adrian and Mandy really enjoyed their moules a la creme and even ‘drank’ the last of the liquid.

We had visited the cathedral in the afternoon …….

and returned at 10pm for the son et lumiere show – no story related at this one but the light effects were super! How they manage to project the range of colours with such precision is amazing. Apparently this is how the cathedral would have been decorated originally.

Tuesday saw Contessa leave and Mandy & Bill pull up behind us. Adrian was trying to fix a couple of things on the boat – most notably checking the oil leak from the gearbox and re-attaching the rudder indicator lever – Bill was soooo helpful!

We were so pleased with the outcome of both issues that we opened a bottle of Champers and joined forces for an excellent meal together on Piedaleau! I provided the curry & Mandy whipped up a plum crumble with ice cream and custard!

I mentioned les Hortillonages earlier and we decided to go and investigate further. There are little ‘barques’ that take tourists around this wetland but the queue was so long we decided to walk around on our own. Really quite a bizarrely beautiful wetscape. The sun helped and we could only imagine what it must have been like for the peat cutters, in the winter, hundreds of years ago. Peat cutting was obviously a major industry throughout the Somme valley as there are marais (wetlands) all the way along the river valley. Driving the boat from the top means that we can see over the banks and often get view of extensive lily filled lakes. It is obviously an area where people spend time in the summer – huge variety of mobile homes, chalets and shacks along the way. Many fishermen, as you can imagine, often hiding in the undergrowth as we come around the twists and turns of the canal!