We didn’t get back to the boat in Bruges as early as intended as I had some health issues which, thankfully, have all panned out OK – just have to keep taking the tablets!

Anyway we got back on 5th April but many of the ‘Bruges Bargees’ group had already left as the winter mooring period finishes on 31st March & then summer prices kick in. So most people had already left but Chris (Laura Marie) and a couple of others were around for a trip to the bar for dinner & a beer or two that evening. We then worked hard over the weekend so that we were ready for the off on Monday morning.

Quite a rush but we set off in convoy with Chris just as far as Deinze where we stayed for a few days. Caught up with Keith and Lucreze. Graine & Andy (JoNi), Keith (Jeanne) & David & Trish (Pilgrim) arrived so we had a most enjoyable outing to Bruno’s for dinner. Then Ellen & Pete (Vlinder) came into port so we were able to invite them to dinner on Piedaleau – they have been extremely hospitable to us previously. 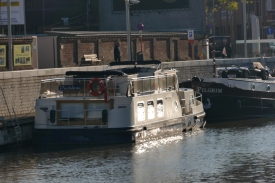 On the Saturday we set off for Kortrijk where we met up with Graine, Andy and Keith again but also with Martin and Sally (Pavot) who have a permanent mooring here. We went over to see them and stayed for dinner! Unfortunately they were setting off on their travels on the Monday but it was great to see them. They certainly seem to have had an eventful winter – most notably Martin fell overboard just before Christmas (fetching fuel from back deck for stove) and couldn’t get out. Sally is tiny and certainly couldn’t pull him out. She called the emergency services & had some difficulty explaining their location but they arrived and got him out. He’d been in the water for 45 minutes & had hypothermia. A salutary lesson. We have reviewed our ladder situation, worked out how to fix it and where to store it. We also have the Belgian emergency call app on our phones – 112.be – which calls the services immediately and they can locate you from the call.

We decided to stay in Kortrijk for the Easter weekend and really had quite a jolly time of it with Graine, Andy, Keith & Chris – + the 2 dogs (Wilma and George). One evening we were sitting outside a bar having a drink when we noticed a ‘hen party’ group come along. The bride to be came up to us and asked if we knew George – don’t think she expected George to be a 6 month old Staffie puppy! STill Chris enjoyed enjoyed drawing George’s paw print on her tee shirt for her…….

A shared curry dinner on Piedaleau’s top deck turned into a culinary feast with contributions from all! 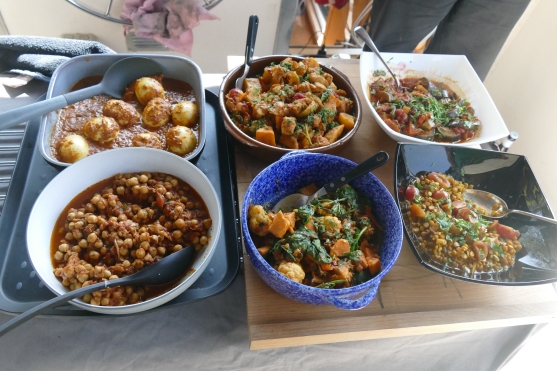 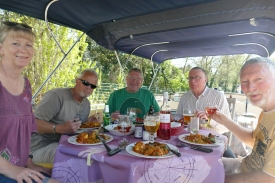 Adrian and I managed to use our museum passes to visit the Museum of Flax and Linen. Sited in an authentic flax depot. Interesting to see how the cultivation and treatment of flax has developed over the centuries and how the fortunes of the town were so closely aligned with it. The industrial revolution and mechanisation of the process had an adverse impact. As did the cheaper imports of foreign cloth. The industry did adapt by focusing on the treatment of high quality local flax. Apparently the Leie, which flows right through the centre of Kortrijk, was known as the ‘golden river’ due to the discolouration from washing the flax. It seems that flax is used today in all sorts of everyday things eg tennis rackets! Examples of beautiful damasks, laces & linens were on display.

The whole of the historic centre of this beautiful city seemed to be taken over by a huge Easter fair. Bizarre seeing a mediaeval tower surrounded by tacky stalls and hair-raising rides! Enjoyed the fireworks on Saturday night though! Unfortunately Chris’s stay was clouded by having his bike stolen from his boat in the early hours of Sunday morning – he heard someone on deck and yelled at them but the 2 guys just looked at him from the bridge in front……. With a local lady’s help he reported the theft to the police who attended the boat within 15 minutes! Unlike at home when 4 sheds were broken into and over £6k’s worth of bikes were taken and the local police website declined to log it!

We had some interesting and rather active local wildlife around us – Coots fighting; Grebes courting and lots of ducklings! 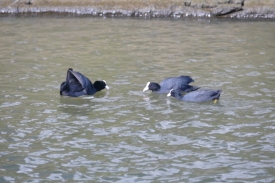 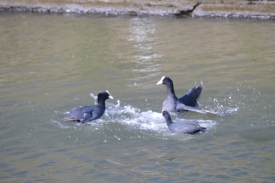 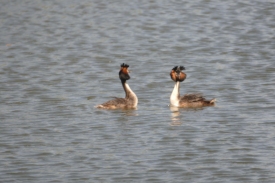 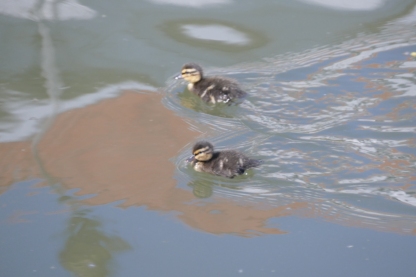