From Bossuit we left the Haut-Escaut to travel up the Bovenshelde towards Ghent. New waters for us – another tick in our Belgian waterways box! Its a busy waterway with lots of big commercials moving in both directions! Thank goodness for AIS (Automatic Identification System) which Adrian installed at the beginning of the season. All ships over 20m have to have this operating (so technically we don’t), it tracks where ships are, which direction they’re going and how fast. You watch the little triangles on the screen for advance warning of other ships around you. Can be very helpful!

We stopped in the medium sized town of Oudenaarde for 3 nights and found it to be a delightful place. Unfortunately the mooring was rather noisy as the area around it is being redeveloped – will be rather smart in a few years time – so we had diggers, earth movers and power hammers going through the day! Could literally ‘feel’ the works through the boat! On the last morning we were awoken at 6.30am by a very loud clang – the boat shook – felt like something or someone had landed on us – I jumped out of bed to look through the window and saw that they had already started work beside us and had delivered a large tank thing nearby. A rather rude awakening!

But we liked Oudernaarde – ‘Old Landing Place’ – which was founded as a fortress on the River Scheldt in the 11th century. It has a long and troubled history  – scrapping with its rival town of Ghent during the middle ages, and often besieged. It developed as a cloth town & was celebrated for its tapestries in the 15th Century.

The Markt (Grand Place) in the centre is dominated by the gothic facade of the Stadhuis (Town Hall). Stunning in the evening sunshine – demands you sit watching the world go by at one of the local bars, with a beer. 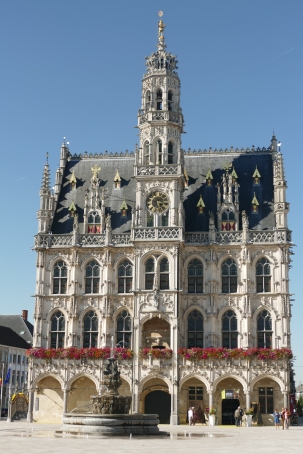 The Museum of Oudenaarde and the Flemish Ardennes is housed in the Stadhuis. Internally it is also stunning with superb staircases & high wooden vaulted ceilings. We visited the museum and the exhibition of Adriaen Brouwer. A Flemish artist who was a contemporary of Rubens, & Bruegel but little known outside of Belgium. He was renown for his portraying people of his time, drinking, flirting & smoking. Never seen so many paintings of people smoking! Unusually, for his time, he focused on peoples’ emotions so the faces of his subjects are never dull. Links were made to other artists of the time and the influence that they each had on each other. He died very young and only painted around 70 canvasses.

The Museum also incorporates the nearby Lakenhalle (Cloth hall) which contains a stunning selection of huge tapestries.

We bought a leaflet of 2 walks from the Tourist Information centre and set off around Oudenaarde – a very worthwhile 1.5 euros worth. We saw one of the old textile factories which has been converted into a posh apartment complex.

The housing provided for the workers consisted of terraced houses with decorative brickwork reflecting the weaving patterns of the textiles produced in the factory. 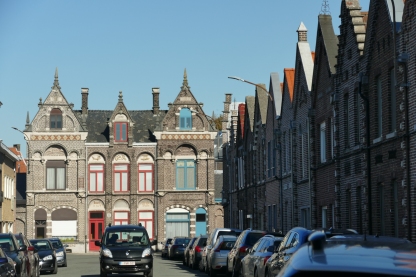 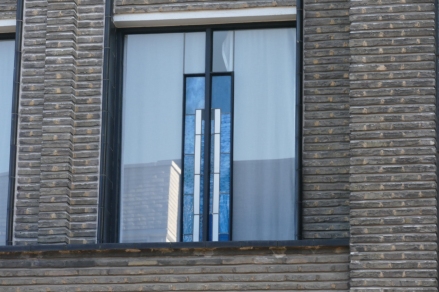 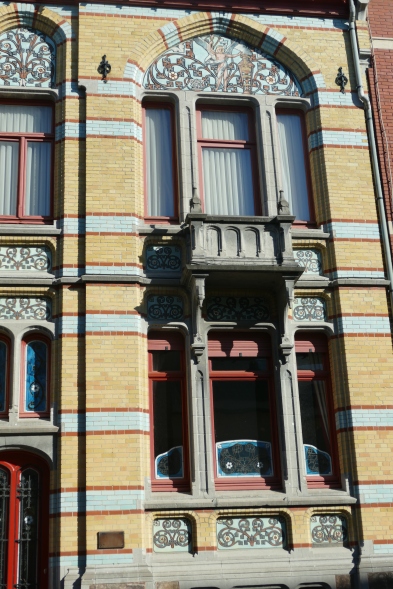 And to top off our walk around Oudenaarde we visited the beautifully kept Begijnhof!

As you can imagine we were thirsty after all this touristing, so it was back to the Markt for a local beer, or two! 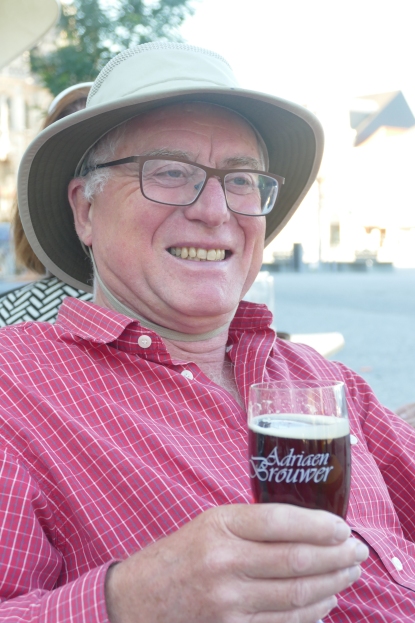