After our sortie to Halle and Brussels we returned to Seneffe for a couple of days before heading off up the Sambre towards France. Our aim is to cruise along as many of the Belgian waterways as we can. We had heard that the Sambre is picturesque although the part through Charleroi is very industrial and not suitable for stopping. We decided to see for ourselves.

About 25 kms and 3 x 7m locks took us along the Canal Bruxelles-Charleroi to where it joins the River Sambre. The area here is surrealistic. Huge, many derelict, industrial constructions. Like something out of War of the Worlds – just needed Richard Taylor’s voice over….. inspired me to go black and white but the contrast with a clear blue sky was interesting to say the least! 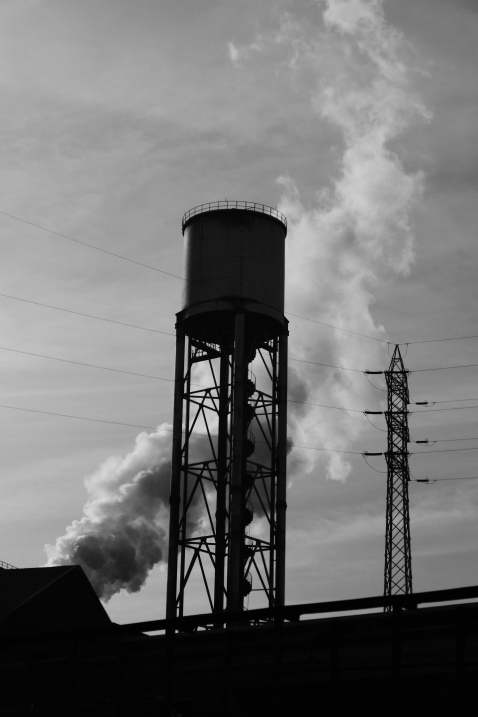 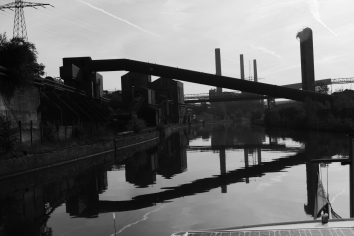 This area would have been at the heart of the coal and steel industries, but now no longer in use.

Unsurprisingly the graffiti artists have been creative ……. 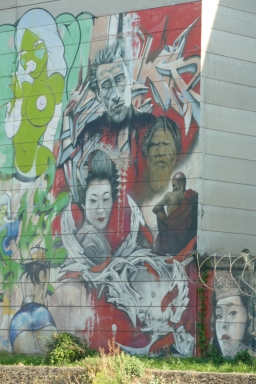 We pulled into Marcienne-au-Pont for the night and met Jean Pierre & his wife – he’s the Capitaine at Beez Yatch Club where we left the boat last summer. His wife warned me that the area is not very salubrious, certainly one of the poorest we have seen, & not to leave the boat at night even though it looked to be a mooring in a park beside a ‘chateau’.  Jean Pierre gave us lots of information about the Sambre and the moorings – all seem to be free and most have free water and electric as well!

We stayed the night and then headed off to our next stop at Thuin. We left the industrial area and headed up the  increasingly rural Sambre. The locks are smaller and worked manually by lock keepers who alerted each other of our passage! They even live in the lock houses!!! Like being back on some of the older french canals! 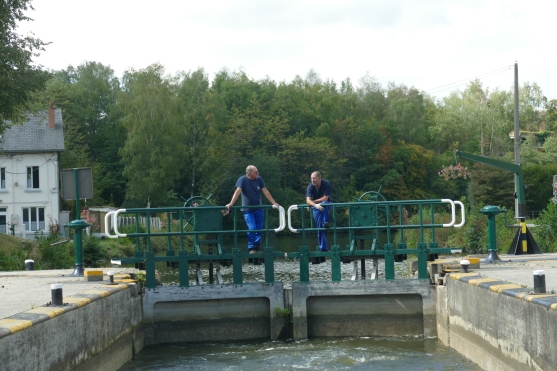 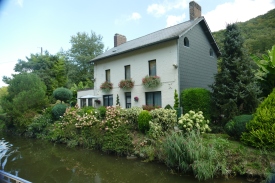 Thuin is a nice little town, with really good mooring, shops and a Friday market – what more could we ask? Except, perhaps, to meet up with some good friends. We were excited to see Pavot moored at the end of the quay – we’d met Sally and Martin (+ dogs) at Leers Nord – we jumped off and went to say hello! We had a great evening together sharing supper and quite a few glasses. 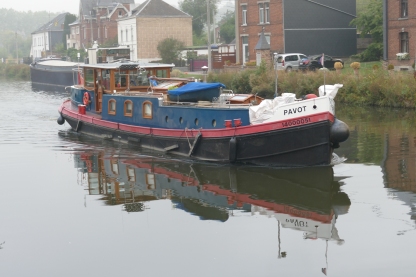 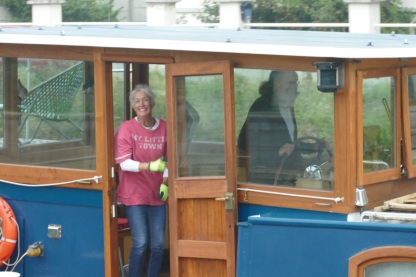 As ever for us, pride comes before the fall …….. as we were leaving Pavot Adrian couldn’t find his manbag! Those of you who know us well will be familiar with Adrian’s tendency to misplace / lose items. In fact Sally’s first comment was ‘not the lost wallet again!’ To cut a long and painful story short (included cancelling some cards and a sleepless night) we were about to go and report the loss / theft of said bag to the police, when I looked down between the pontoon and wall (again & Adrian had already virtually dredged along here) to see a bag type corner floating ……. Adrian retrieved his bag after a night in the drink – everything there but decidedly soggy! What we think happened is that he put the bag on the wall whilst sorting the electric cable and must have flicked it off into the drink. There was a young couple sitting nearby so we were concerned that they may have been opportunistic thieves. Our apologies to them! We managed to dry everything out bit by bit but Adrian’s passport was decidedly washed out! Found a local photographer’s so had a pickie done and he completed an online application for a new one. Disaster averted but it cost him over £120!

We continued up the Belgian Sambre enjoying the rural scenery and quiet waterway, all the way to, & just across into, France at Jeumont. We had hoped that we would be able to replace our empty gas bottle (we have French bottles / connections) but Adrian was unable to locate a local supplier – we will take a trip by car when we are back in Bruges. The French Sambre is currently shut, undergoing major renovations so we couldn’t go much further and we didn’t want to pay for a French vignette for a few kms, so we turned around. We made our way back along the Sambre, stopping at Lobbe where we met up with Nils on Auroa, Norwegian guy we know from Bruges. We cruised together for a couple of days and we learnt a new phrase ‘a mooring beer’ when he came on board suitably equipped after quite a long day!

We really enjoyed the Sambre, pretty, mostly rural but with some industry, not at all busy, nice lock keepers, with pride in their locks. And we had beautiful weather – able to sit out for dinner until the sun went down. 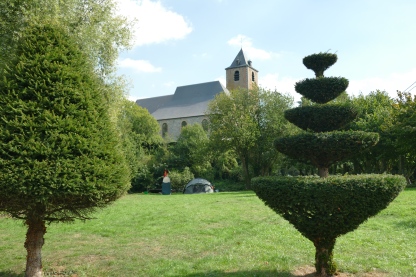 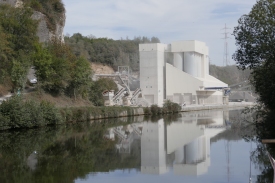 After just a couple of days we noticed that autumn was fast approaching with the trees just beginning to change colour. 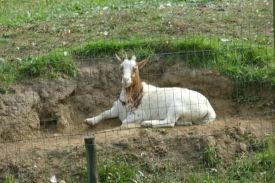