After our somewhat hilarious (even if I couldn’t keep up with all the jokes and innuendos in drunken french – Adrian, of course, could, and laughed a lot but then couldn’t remember in order to relay to me later!) and boozy evening at Ittre Yatchclub, (recovering from the fan belt incident) we continued our way towards Brussels on 6th Sept. The Brussels-Charleoi canal is pretty busy with commercial traffic. The lock at Ittre is deep, 14m, and we had to time our passage in between the commercials. When I called into the lock we were told to ‘depechez vous’ to take the lock down before the next commercial arrived in the other direction. We hadn’t far to go, only about 10 kms, as we had spotted that there is a halte nautique at a place called Halle on the trainline to Brussels.

We arrived at Halle to find a fairly crappy wall beside a bus stop with unhelpfully spaced bollards. We couldn’t moor at the ‘best’ end because it was reserved for passenger boat usage. Eventually we moored up and set off to the station for the 20 mins train ride to the centre of Brussels. Being old folks (65+) we get a 6.50 euro day ticket which we thoroughly enjoy using whenever possible!

The mooring turned out to be fine except that the commercials coming to & from Brussels seemed to pass exceptionally close to us! The canal narrows on its approach through Brussels. Most captains waved to us but a couple suggested that we should move back as they needed the manoeuvring space, but we couldn’t because of the passenger boat mooring. We were there 2 nights without incident although we were pleased to leave. But we did find there is an excellent fish restaurant across the road from the mooring, very welcome after a hard day at the museums!

We spent 2 days touristing in Brussels but hardly scratched the surface! Certainly a city to return to in the future. We visited the Grand Place (Grote Markt) which is stunning. Ornate 17th century Belgian architecture. Open air markets have been held here since 11th century but the French destroyed all but the Town Hall in 1695. The Guilds rebuilt in the Flemish baroque style with much decoration and gilding on the buildings which has obviously been fairly recently restored. We sat with a beer to admire the architecture and watch the world go by. A beer festival was in preparation throughout the Grand Place so it was rather busy – unfortunately (or perhaps fortunately) it wasn’t due to start until the next day. 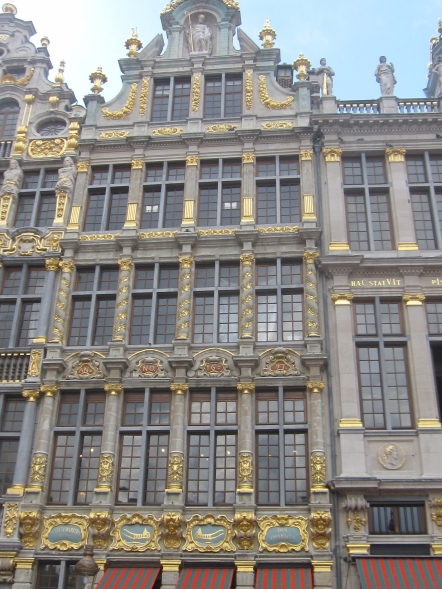 We visited the Hotel de Ville, Town Hall, which acts as a museum for the history of the town. Somewhat bizarrely the top floor is dedicated to the Manneken-Pis. The 2 foot high statue of a little boy relieving himself into a small pool is a Brussels attraction. It has a very long history, been broken and stolen and then found in the canal. There is a tradition of visiting heads of state presenting Brussels with miniature versions of their national costume. 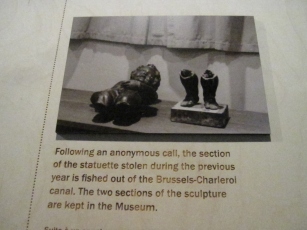 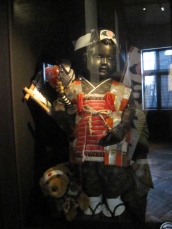 Unfortunately we weren’t able to visit the Royal Palace – it is only open to the public at certain times of the year – but we walked around and watched the changing of the guard.

I did enjoy the  19th century Galéries St-Hubert, the first shopping arcade in Europe; very elegant with superb shops and a soaring glass domed roof. 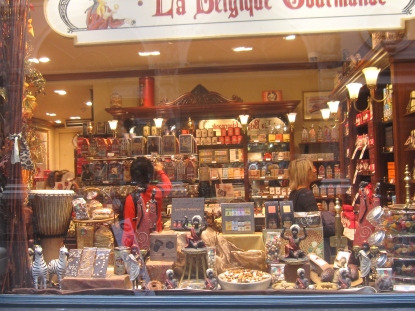 The Musées Royaux des Beaux-Arts de Belgique are superb – we went to the Old Masters’ museum, the Musée Magritte and the Musée Fin de Siecle. All this and no café open in order to refresh our weary selves! The highlights for us were the Bruegels (including an interactive ‘Unseen Masterpieces’ exhibition) and an Art Nouveau display. Brussels has some fine Art Nouveau architecture but this will require a future visit.