On the Bruxelles-Charleroi canal the the Inclined Plain at Ronquieres is an impressive feat of engineering. Completed in 1968 it reduced the time it took barges to travel between Brussels and Charleroi by approx 7 hours.

Basically it takes boats up / down 68m (221 ft) in one operation by using a transporter-lock – you go into one of the two huge bains  (‘bath tubs’) and the whole thing then moves up or down the 1.5 km long sloping boat lift.  The water level in the bath tub is equalised once the boat(s) is in & well secured – they don’t want boats bouncing about as the lift operates – the tubs are pulled over rollers and the speed of ascent / descent has been carefully calculated to avoid any sloshing about! It takes approx 40 mins to go from top to bottom – quite a slide!

Only one bain is currently in use, the other side is undergoing renovation. The day we arrived to go down we literally went straight in, no waiting at all, 45 mins in total, top to bottom. On our return trip a few days later we had to wait about 45 mins for the tub to come down to us – just time for lunch! 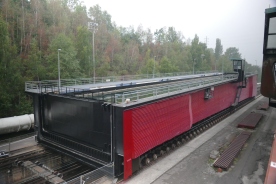 They obviously wanted to make the most of this construction and it is a major local attraction. There is a huge tower at the top which houses a museum of the waterways, explaining how & why this sloping lock was designed and constructed, and showing something of the history of the life & work of the bargees. The tower seems to have no other function than to house this museum – rather expensive to say the least. It seems that the sloping lock is not exactly busy either – 10 return trips a day, less than 20 boats a day!

On our return trip the whole place was hopping! A real family day out – lots of visitors, bouncy castles, boats to hire by the hour and even a zip wire! As we arrived at the top the assembled gongoozlers gave us a round of applause! 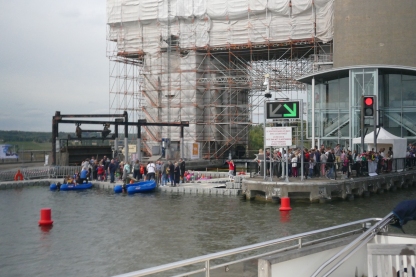 So we have seen Le Plan Incliné de Ronquières from both sides now; from up and down ……

We met a man living beside the canal just downstream from Ronquières who told us that it is seen as a very expensive and unnecessary edifice by the Belgians.

We met him soon after we exited the lift on the way down, our fan belt broke causing the engine to overheat and the alarm to sound. Once again an example of pride coming before the fall …… we were congratulating ourselves on our speedy transit. We had to stop to see what had gone wrong and then replace the fan belt. Nowhere very good to stop – sloping or rocky canal sides – but we had to stop.

This gentleman was cutting his grass and came to help us secure the boat & prevent it going onto the rocks at the side when commercials came past! Although we asked them to slow down and most did so, we were still affected by the wash they cause. One commercial even offered to take us to safer place, but by then Adrian had almost finished replacing the offending fan belt! He managed despite having to keep stopping to help fend the boat off the rocks!

After this incident we changed our destination to the local yatch club at Ittre, where we received an extremely warm and pretty boozy welcome. Just what we needed!